The first game of the new season took the Cannons to a picturesque Lane Cove on a glorious Sunday morning. Coach Michael has the team well drilled and at peak fitness to kick off the 2019 campaign. The team has the same look and feel as the U12YG  last year, albeit with a little more height and athleticism.

The game got off to a swift start with the ball pinging from one end of the ground to the other without much return for either team. Grace went on a long searching run with a couple of bounces and slammed home the first goal of the year to put the Cannons in front early.

The Cats then counter attacked and dominated the second half of the first quarter, kicking five consecutive behinds. The second quarter was a more even affair with both sides applying tackling pressure. Molly broke free to kick a couple of signature goals from a long way out and Scarlett M was busy up forward, evading defenders and causing havoc. Ruby’s persistent ruck-work gave the Cannons first use of the ball around the stopped plays and counterbalanced the Cats height advantage.

After the main break, the heat went up and Niamh and Katie stood tall on the last line of defence making sure the Cats couldn’t break through. Grace continued her strong tackle breaking runs and long kicks forward and Lucy and Ruby ran hard and stopped the ball clearing out to the swarming Cats players on the outside of the packs.

The last quarter began on an even keel with the Cannons marginally in front. All of a sudden the usual suspects rose to the occasion. Molly barging through packs launching the ball forward, India tackling and handballing to running players in the clear, Sienna pushing the ball forward at all costs and Katie and Ruby standing tall when it counted.

After about 10 minutes of hard work Scarlett M  scrambled through the goal that would end up putting the Cannons two scoring shots ahead… yet the most telling moment of the game was yet to come. After tumbling the ball forwards, the Cats had players free all down the left hand side of the ground – then like a flash Scarlett B ran down the Cats ball carrier after she had tried to baulk, Scarlett landed a bone crunching tackle that kept the ball locked in the Cannons forward half and when the final siren blew the new look U14 Teal girls were 10 points ahead.

A great win for the team in a higher standard of competition. Amazing to see how well the girls had progressed year on year, Lucy and Catriona were awesome and looked very comfortable in the U14 comp. Great games by Grace, Molly and Scarlett. Well done girls! 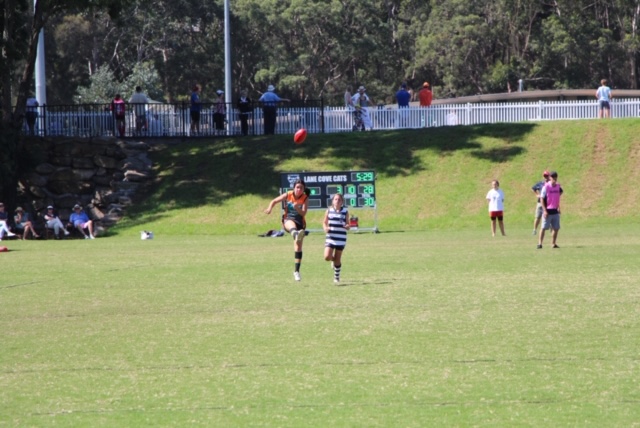 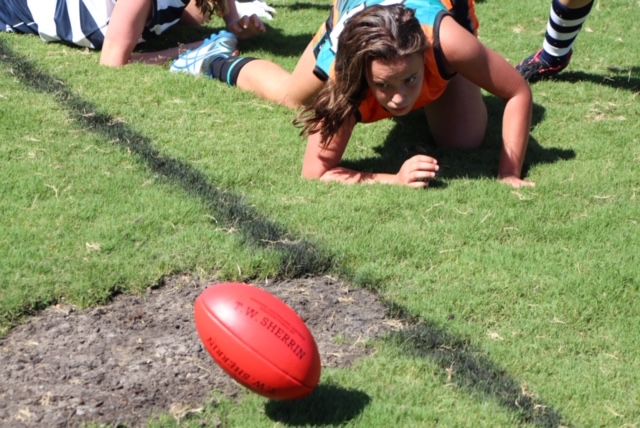