After last week’s maiden win against the Maroubra Saints, I didn’t think anything could top that awesome victory.

However I was proven wrong, when our Cannons ventured out to a wild and windy Heffron Park to take on the Saints for a second time.

And what a heart stopper it was as our courageous Cannons held off a determined Saints outfit by the narrowest of margins (4-6-30 to 4-6-29).

It was a game worth bottling as both teams gave it their all and had the spectators biting their nails and one team manager reaching for his blood pressure medication.

With a strong wind at their backs, the Saints got the jump on us in the first quarter and took a commanding 20 -7 lead at the break.

It was a quarter where, despite running into a gale force breeze, we had field position but couldn’t capitalise on our chances. Seconds from the quarter time break, the Saints snuck in a goal. If anything this would have deflated any other team, but not our “never say die” Cannons.

Coach Andrew gave his usual quarter time rev up and with the wind behind our backs in the second quarter, our boys dug deep to post another goal and 2 behinds and managed to keep the Saints scoreless for the entire quarter.

At the halftime break our Cannons were down by only 5 points.

Going into the 3rd quarter and running into the breeze was going to be a tough call for the boys, but the Cannons came out with all guns blazing (pardon the pun).

They tackled and scrambled hard in defence and gave the Saints no respite.

Probably the goal of the day was a result of great lead up work from Nirvan who got a brilliant pass onto Filip who nailed a valuable goal.

At the final break we were down by 6 points.

With the wind behind us in the final quarter, the game was there to be won.

The Saints came at us hard in that final quarter and were poised to win. But our tackling and defence were relentless.

There was one vital play in the dying seconds, where the Saints came close to scoring only to see Daniel V getting a clearing kick out of the danger zone.

This pretty much summed up the effort of our Cannons.

That quarter saw the boys lift a gear and rally hard to post 7 unanswered points to snatch an amazing one point victory.

The goals may not have been forthcoming, but in trying conditions the boys just never gave up the fight! And I have never seen such great scrambling defence and hunger for the ball!

I can’t recall managing any team that was able to win a game despite being behind at every break and keeping the opponents scoreless, not for one but two quarters. A truly memorable victory with so many highlights.

Firstly well done to Harry on managing a hat trick of goals and to Filip on his 3rd quarter pearler.

Coach Andrew once again had a heck of time trying to work out best on ground; even the parents doing the voting had the same problem.

ALL of our Cannons had their best game ever, so the man of the match could have gone to any of the boys.
To Phoenix, Patrick R, Patrick C, Oliver Richards, Finn, Chris, Jacob, Ollie S, Jamie, Roan, Lucian and Rameez:
You boys are to be commended on your games. The best game ever, especially when it came to tackling and chasing hard for the ball. You would all be worthy winners for best on ground.

To our second runner up, well done Harry on your hat trick and getting amongst the attack, great stuff.
Jack Scott was a tower of strength in the ruck and constantly won the centre bounce, another awesome game Jack who played the last two quarters under duress (asthma). Gutsy effort Jack.

Congratulations to Nirvan on taking out best on ground. Best game ever, not only set up that vital goal for Filip, but tackled and chased hard all day, well done!

It was a game where the boys showed great pride in the Cannons jersey and belted out the team song twice.
Even our injured Cannons watching from the sidelines joined in the celebrations. 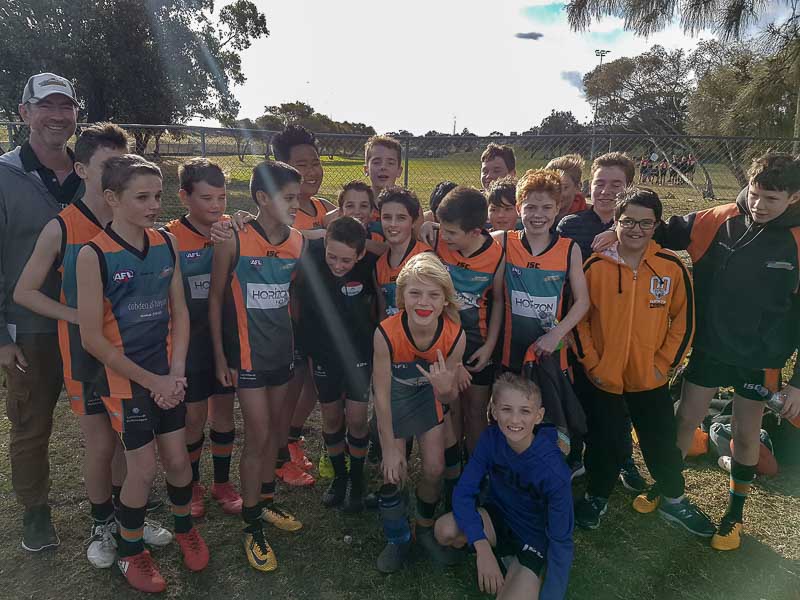